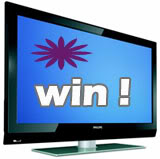 11/6/13 – Tuesday’s Dickinson’s Real Deal comp on 11th June 2013.  3 free web entries are allowed from this web page with either ITV, STV or UTV for today’s Real Deal competition.  In today’s competition, broadcast from Peterborough, web entrants are allowed up to 3 (three) free web entries via the ITV.com, STV.tv or U.tv websites (see links below).

This week’s prize is an accumulator so the daily prize value will be increased as each day passes.

Which of these fashion designers is the daughter of a former Beatle?

This competition open to UK, Channel Islands and Isle of Man residents aged 18 years or over only, excluding employees of the Promoter, their immediate families, and anyone else professionally connected with the competition.

Grab your 3 (three) separate free comp entries by clicking on the following pink button or the links below.

Each competition submission entry only takes about 1 minute to complete!

You and your friends will save at least £3.09 each on paid entries. You can get free entries on this website everyday except Saturday’s with ITV’s Dickinson’s Real Deals competition.  Plus you’ll find free entry to all the latest ITV competitions.

There will be another chance to win cash with ITV’s Real Deal competition from Leamington Spa on Wednesday 12th June 2013.

You can find other Real Deal comps with free entries that are still available on this link.

Prize winner for Tuesday 28th May.

Congratulations to Mr W Smith of Andover who won £3,210 in a cash prize.

The latest Dickinson’s Deal competition winners can be seen on this link;

Free entry competition for Britain’s Got Talent.   Free ITV website entries to win £50,000 in cash and New York, Los Angeles and London trips.  The winner will also receive theatre tickets for Spiderman, Warhorse and Billy Elliot – The Musical. The last chance to enter six times for this free competition ends on 20th June 2013.

PS. You can’t submit your entries in the comments section!